You are here: Home / Frugal Living / Best Of: How to Sprout Beans

This is time of year I start to balk at the price of fresh produce at the stores, but am sick of the veggies that are in the freezer. . . I just want something fresh, but inexpensive.

Enter the magic of sprouts!

Sprouts are an easy at home addition to your diet. There are lots of great websites like Sprout People and Primal Seeds, and they will sell you some really neat sprouting apparatus and kits like this one for $13.85, but all you really need is a mason jar with a canning ring and a piece of cheesecloth or gauze. 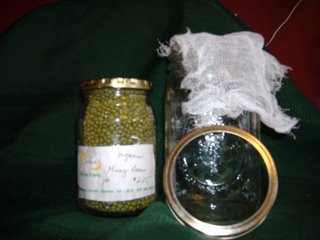 I spent a little over $2 for my mung beans at the bulk food store, and I probably had half again as many as are left now. (note the storage in the reused pickle jar). These are some CHEAP veggies compared to what you buy in the store, pound for pound. 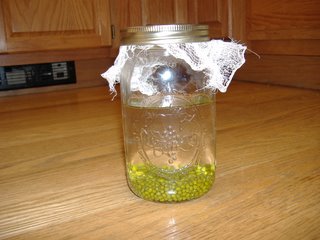 1TBS of mung beans will make about 1 cup of bean sprouts. Here I placed 1TBS of beans into my mason jar and filled it with water, placing the cheesecloth and canning ring on the top. Then you just set it aside and let the beans soak for about 6-8 hours. 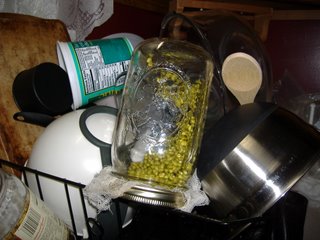 Next you drain the beans. I pour the water out and then leave the beans draining at an angle in the drain board. I never put mine in the dark as some places recommend and they have come out fine. 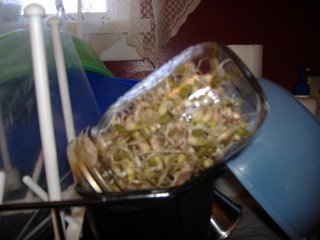 For the next week or so you just rinse and drain the beans a couple of times a day. Sprouting is fun to do with the kids, because after about the first two days they get to see the sprouts growing. 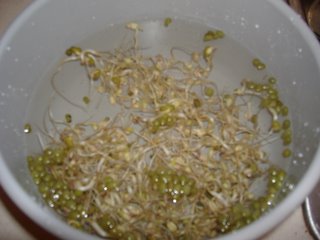 When they look big enough, you can consider them done. I let the ones in the picture above sprout for about 8 days total. The mung beans have a sort of “hull” on them that is a bit of a pain to get off. One method is to put all the sprouts into a large bowl of water and then swish them around until the hulls float and can be skimmed off. That is sort of finicky, so if I am going to be eating them cooked I just leave them on. 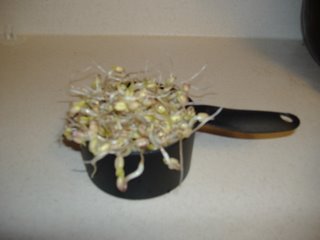 Completed, 1 cup of sprouts, as promised.

According to the Sprout People’s “Sprouting 101” you can sprout just about any bean or seed that you would eat the plant of. I’ve sprouted alfalfa (which are those thin ones you see on salad bars etc) the mung beans (which are what you think of as the typical oriental sprouts) and I even tried kidney beans (kidney bean sprouts MUST BE COOKED-the raw sprouts have toxins in them). I’ve also heard that you can sprout radish seeds for “spicy sprouts” that taste awesome on sandwiches or salads. . .

How many of you are “sprouters”? What are some of your favorite recipes?